In this module students will learn how to connect and control a servo. A servo is a type of motor that can be controlled in increments. Usually from 0 to 180 degrees.

Arduino Servo Project #1 - Sweep Back and Forth

In this activity you will center the arm at 90 degrees. Follow the images below. Image 1 gives you a general understanding of how a servo is attached to the Arduino. Image 2 shows how to attach jumpers to a servo that has a connector. Image 3 describes the code used to center to 90 degrees. After you have centered to 90 degrees, check with a protractor to see if it is at 90 degrees. Then modify the code to center at 45 degrees and then at 179 degrees. Each time check with with protractor for accuracy.

In this activity you will control a servo with a potentiometer or knob. Follow the instructions and images below.

Add a third servo and third potentiometer to the last activity. Modify the code to add another of each. .

Arduino Servo #5 -  Alternate Sweep Back and Forth 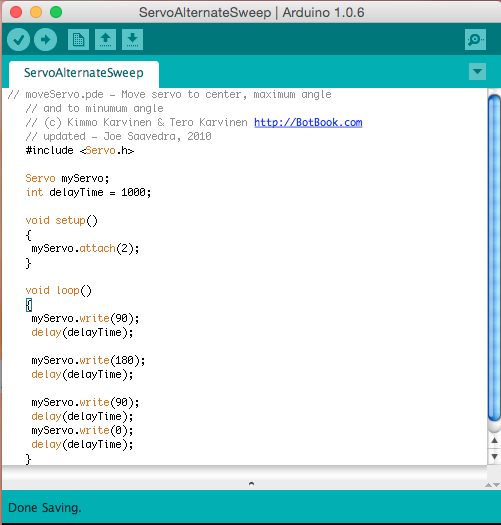 In this activity you can program a button to control the movement of a servo when the button is pushed. This program uses conditional statements that tell the servo IF the button is "off" or "LOW" then do something,  Else (otherwise) do something else. You could create a project where the button controls the servo opening a lid or door.